Update: 18:00 GMT Thanks to SpOOky for the following extra info/specualtion. 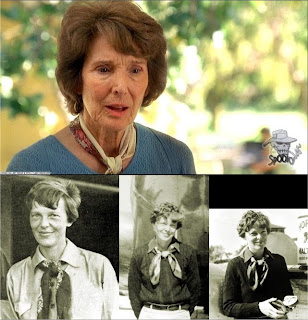 Her 7:58 a.m. transmission said she couldn't hear the Itasca and asked them to send voice signals so she could try to take a radio bearing
They couldn't send voice at the frequency she asked for, so Morse code signals were sent instead.
Earhart acknowledged receiving these but said she was unable to determine their direction

Also Losts Amelia Looks quite like Amelia Earheart (Atleast to me )

Thanks to Dudu for the following.

The news in the radio is about Amelia Earhart, (http://www.ameliaearhart.com/ ) A woman who tried to fly around the world, but she disappeared. 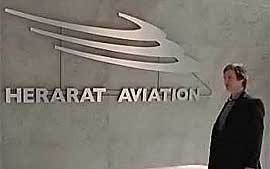 Some bio about her 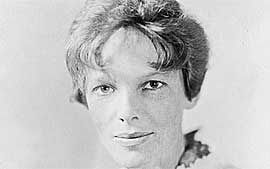 In 1937, as Earhart neared her 40th birthday, she was ready for a monumental, and final, challenge. She wanted to be the first woman to fly around the world. Despite a botched attempt in March that severely damaged her plane, a determined Earhart had the twin engine Lockheed Electra rebuilt. "I have a feeling that there is just about one more good flight left in my system, and I hope this trip is it," she said. On June 1st, Earhart and her navigator Fred Noonan departed from Miami and began the 29,000-mile journey. By June 29, when they landed in Lae, New Guinea, all but 7,000 miles had been completed. Frequently inaccurate maps had made navigation difficult for Noonan, and their next hop--to Howland Island--was by far the most challenging. Located 2,556 miles from Lae in the mid-Pacific, Howland Island is a mile and a half long and a half mile wide. Every unessential item was removed from the plane to make room for additional fuel, which gave Earhart approximately 274 extra miles. The U.S. Coast Guard cutter Itasca, their radio contact, was stationed just offshore. Three other U.S. ships, ordered to burn every light on board, were positioned along the flight route as markers. "Howland is such a small spot in the Pacific that every aid to locating it must be available," Earhart said.

At 12:30 p.m. on July 2, the pair took off. Despite favorable weather reports, they flew into overcast skies and intermittent rain showers. This made Noonan's premier method of tracking, celestial navigation, impossible. As dawn neared, Earhart called chief radioman Leo G. Bellarts and asked for Itasca's location. She failed to report at the next scheduled time, and afterward her radio transmissions, irregular through most of the flight, were faint or interrupted with static. At 7:42 A.M. the Itasca picked up the message, "We must be on you, but we cannot see you. Fuel is running low. Been unable to reach you by radio. We are flying at 1,000 feet." The ship tried to reply, but the plane seemed not to hear. At 8:45 Earhart reported, "We are running north and south." Nothing further was heard from Earhart.

A rescue attempt commenced immediately and became the most extensive air and sea search in naval history thus far. On July 19, after spending $4 million and scouring 250,000 square miles of ocean, the United States government reluctantly called off the operation. In 1938, a lighthouse was constructed on Howland Island in her memory. Today, though many theories exist, there is no proof of her fate. There is no doubt, however, that the world will always remember Amelia Earhart for her courage, vision, and groundbreaking achievements, both in aviation and for women. In a letter to her husband, written in case a dangerous flight proved to be her last, this brave spirit was evident. "Please know I am quite aware of the hazards," she said. "I want to do it because I want to do it. Women must try to do things as men have tried. When they fail, their failure must be but a challenge
to others.""

You should have included this picture in the article and a note on her facial similarity to Amelia E.
http://images.wikia.com/lost/images/c/cf/Amelia.jpg

Doesn't anybody wonder why Sam is picking up a radio transmission from 1937? Or did I hear it wrong?

There is a discussion on that already, somehwere down the site...

Wasn't there a theory or a producer's mention that 'Adam and Eve' were actually Earhart and her co-pilot and a part of the 'mystery of the island'?

the likeness is uncanny to me..look at the hair fringe..

okla21fan :
I guess your thinking
Earhart and Noonan = Adam and Eve ?

Your skeleton Comment reminded me ff something I read about Earhart ....

'The Gardner Island hypothesis has been characterized as the "most confirmed" explanation for Earhart's disappearance.

The International Group for Historic Aircraft Recovery (TIGHAR) has suggested Earhart and Noonan may have flown without further radio transmissions for two-and-a-half hours along the line of position Earhart noted in her last transmission received at Howland, arrived at then-uninhabited Gardner Island (now Nikumaroro) in the Phoenix group, landed on an extensive reef-flat near the wreck of a large freighter and ultimately perished.

A British colonial officer (also a licensed pilot) radioed his superiors to inform them that he had found a "skeleton... possibly that of a woman", along with an old-fashioned sextant box, under a tree on the island's southeast corner. He was ordered to send the remains to Fiji, in 1998 an analysis of the measurement data by forensic anthropologists indicated the skeleton had belonged to a "tall white female of northern European ancestry."'

Could Adam & Eve be Earhart and Noonan ?
This is Lost anythings possible :)

I always thought Herarat aviation was a red herring. After all, that was the episode when we discovered that Juliet was a rat. They had the Hoffs/Drawler thing in TTLG, why not tell us about the twist at the end of One of Us via the aviation company?

I honestly think it would be really silly if Amelia Earhart ended up on the island.

havoc1922 said...
Doesn't anybody wonder why Sam is picking up a radio transmission from 1937? Or did I hear it wrong?

Hurley: Hold it, stop! Do you hear that!

Radio Announcer: [with spotty reception] That was the old
classic Just A-Sittin' and A-Rockin' by Duke Ellington and his
Orchestra, featuring Cootie Williams on the trumpet. Up next on
WXR, the Glenn Miller Orchestra with Moonlight Serenade.

[The song begins to play with good reception]

Hurley: Whoa, you hear how clear that is? It's got to be close,
right?

Sayid: Radio waves at this frequency bounce off the ionosphere.
They can travel thousands of miles. It could be coming from
anywhere.

Damn! I don't know what to think about all the Lost theories involving time.

Sorry, but can someone remind me more about Amelia on the show?

there you go heyker

LOVE THIS THEORY!!!! Amelia on the show was the old lady that appeared in Juliet's flashback - in the book club. it is unknown what role she plays in the "lost" hierarchy.

Just correcting myself ... Heratat Aviation apears in "ONE OF US" not in "Not in Portland"

Hmm it could be the same Amelia if we hold that the island is causing the Others to age slower or live longer. Earhart would be over 100 by now.

I don't think it's at all silly to speculate that Amelia might be Amelia Erhardt. The clues have suggested that the research being done on the two islands involves klotho, the anti-aging protein – I think either because the island naturally raises levels in people or by administering it experimentally. We know Richard Alpert hasn't aged in decades. It makes sense that a number of filthy rich people would be involved in some Atlas Shrugged scheme that includes a kind of fountain of youth, just when the numbers are insisting the end is near.

She has the bangs (fringe) and she has the scarf. Wow. I always wondered why they made a point to show her so much in that one episode.
Just an aside, the actress playing Amelia was in Creature from the Black Lagoon. My friends got to meet her at a signing and told her how they had seen her on Lost and asked if she was coming back. At the time the answer was no, but this was a while ago.

She has the bangs (fringe) and she has the scarf. Wow. I always wondered why they made a point to show her so much in that one episode.
Just an aside, the actress playing Amelia was in Creature from the Black Lagoon. My friends got to meet her at a signing and told her how they had seen her on Lost and asked if she was coming back. At the time the answer was no, but this was a while ago.

OMG, look at the photos of the real Amelia and Lost's...now look at her neck....she has the same scarf/ascot thingy!! Im sure we are meant to think its really her!
Namaste

And namaste to you Dr. Candle! Love your movies! :o)

The scarf, the face, and the hair flip...it's gotta be some kind of allusion or possibly even the real Amelia in Lost's story. Good find!

I must say, this is one theory has really got me thinking. Especially with the Hurley/Sayid radio. Was remembering that too. How cool!!! Can't wait for some confirmation now! :)

Thanks Deneph! But they cost an ARM and a leg to make!
Namaste!

@hurricanebtvs:
Sayid was talking about short wave radio (and he even SAID it)... I explained that already in this post, in the comments:
http://find815.blogspot.com/2008/01/broadcast-from-past.html

Jake, you do make a good point, but do you really think that these two broadcast's from sometime in the 30's, both being recieved in present day or there about, and heard near what we are being led to believe is some kind of quasi Burmuda Triangle... are really NOT related? This is Lost and everything seems to be related.
Namaste!

so awesome . got chills when i read this . they MUST be alluding to something with this

@dr. candle: what TWO broadcasts from the 30s??? If you mean Sayid and Hurley's listening to the radio, it's not from the past, it's from the present! Short wave radio stations sound like that, hell, even AM radio sounds like radio from the past, let alone short wave.
I mean, I AM a total time-travel nerd (Back to the future isn't my favourite movie for nothing), but the more plausible explanation is that the "Amelia-broadcast" is just being caught in the electromagnetic anomaly.

Well if it's not her, the producers were certainly alluding to her, what with the 'look' - especially that scarf!

Well Idk if anyone touched up on their math but i believe if her 40th Bday was in 1937 and she was at Juliette's book club in sep '04 that would make amelia about 107 years old...making her a very likely woman not to be around anymore...however case in point the island does have some weird healing powers/ magic box...maybe amelia is ageless right now...because she accepted the island as locke did to eventually open the magic box to wallah(sp) his father arrives on the island(that sob)

Okay, for some time now alot of people have had a theory that our Amelia from the book club may quite posibly be Amelia Earhart. This is a tough pill to swallow I'll admit. For the sake of argument lets assume that she is, and this theory is true. This would make Amelia 110 years old, being that Amelia Earhart was born 7/24/1897. I know she's an older woman but she looks no where near 110, if that is even posible. we would then file this mystery under the Richard Alpert catagory. So the question is, Are these people aging slower or it time slower on the island?

p.s. aside from the hair, face, and name, I believe the scarf is a big "tell". The wardrobe crew mostlikely had a picture of Amelia Earhart and said, "we need a scarf!".