Thanks to Josh here is the final Find 815 Podcast that we did to wrap things up.

Thanks to all involved.
Posted by DarkUFO on February 14, 2008 2 comments:

Updated: 11:52 PM EST
I thought I'd make a post summarizing all of the Clue Hunt Season 4 Clues after I noticed the Tunisian Newspaper in tonight's episode, it makes it easier than hunting back through posts.

This was the Chapter 1 Season 4 Clue. The Oceanic Hotline. I believe that was the number Frank Lapidus called in tonight's episode to point out that the pilot was totally not the pilot. This goes along with my theory on how its a coverup and not a time warp. (How cool was Frank, btw?)
The clue words for this chapter were:
abc.com: Matthew
au.yahoo.com/lost: Abaddon

This is the Chapter 2 Season 4 Clue. Penny's number. I don't believe we've seen this yet.
The clue words for this chapter were:
abc.com: 423 Cheyne Walk
au.yahoo.com: Daniel Faraday

The Chapter 3 Season 4 Clue was the Tunisian newspaper. This appeared in tonight's episode episode when Charlotte was on the Dharma Polar Bear dig.
The clue words for this Chapter were:
abc.com: 36-15-28
au.yahoo.com: Charlotte Lewis

The Chapter 4 Season 4 Clue was the Santa Rosa pill bottle, which I guess was cluing us in to Hurley's stay during last week's season premiere.
The clue words for this chapter were:
abc.com: Frank Lapidus
au.yahoo.com/lost: Miles Straume

The Chapter 5 Season 4 Clue was a metal container printed "Queens College Department of Physics." We know Daniel Faraday is a physicist. With the information overload in tonight's episode, I don't know if it was mentioned that he was at Queens College or not. I'm assuming he was.
The Clue words for this chapter were:
abc.com: Southfields
au.yahoo.com/lost: Red Sox

I don't know about anyone else, but I thought it was really cool having played this whole game, hearing them mention the Christiane I in tonight's episode, and then seeing these clues pop up in the show. It really makes the whole thing worth it, even if it was a little tangential.
Posted by James D on February 08, 2008 28 comments:

There was a direct tie-in to the "Find 815" ARG in tonight's episode of Lost. The show opened with ROV footage from the Christiane 1 and the boat was mentioned by a TV reporter in a Daniel Faraday flashback.

Screencaps to come. (send any in if you have them)
Posted by Congested on February 08, 2008 26 comments:

Thanks to Orchid who points out that the stock prices displayed on the TV when Sam was Interview are Exactly the same as when Talbot was interviewed about Flight 815 being discovered some time later. 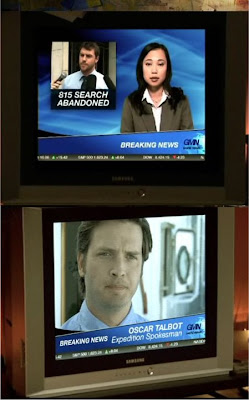 Thanks to The other's master who noticed Sam has a New Email
Is the game really over ? 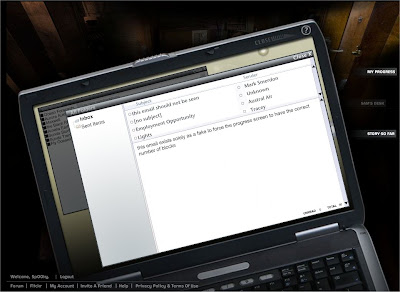 On the Stars in Find815 by Benry and Gigora

Ok, lets start with the stars.

The stars on the ceiling of the chapter 5 clue hunt lead us to pyx the compass..
(orchid)http://en.wikipedia.org/wiki/Pyxis_%28constellation%29
(TAE) http://img.photobucket.com/albums/v233/thatpirategirl/pyxis.jpg
Pyx lead us to Hydra.
(Gigora)http://img132.imageshack.us/img132/1029/pyxishydraph3.jpg

That got me thinking..why hydra? And what does it have to do with the other constellations we have seen?

They all are associated with the Labors of Hercules. (Gigora - OMF's arm is also going in the direction of Hercules when aligned with a star chart)
http://img522.imageshack.us/img522/5382/omfstarchartcopysx1.jpg
(note in this picture her stars have been aligned with the real big dipper)

Hydra- uh, the hydra - Labor 2 - Kill the Hydra
http://en.wikipedia.org/wiki/Lernaean_Hydra
I think this one is easy to figure out. Notes on the labor above

I think this one is self explanatory
Aquarius, the water bearer - Labor 8 - Mares of Diomedes
http://en.wikipedia.org/wiki/Aquarius_%28constellation%29

Ok this one is a little harder. Aquarius + Pegasas = Mares of Diomedes notice the way the question was phrased to Croucher. "does find the water have anything to do with Aquarius?" " No. " is it important to the game?" yes.
http://en.wikipedia.org/wiki/Mares_of_Diomedes

OK, so what does all this have to do with anything?

It explains all the different constellations we have received, and actually more. One of the other hints we received was "follow the water". In one of
the other Labors 7, (http://en.wikipedia.org/wiki/Cretan_Bull ),
Hercules has to capture the Bull of Crete. Hercules has to sail, "follow the water", to Crete to get the Bull. (as a side note Sam is a Taurus, as per his myspace)

We can take this a step further. Hercules lead us to Crete, but other evidence leads us farther. The earthquake stuff.
(gigora - http://img238.imageshack.us/img238/423/cluehuntlightsfliphd1.jpg
http://www.nature.com/nature/journal/v434/n7031/fig_tab/434291a_F2.html )

There is a long running association between Crete and another Island.
Santorini. (http://en.wikipedia.org/wiki/Santorini )
http://img214.imageshack.us/img214/2656/santorinivu1.jpg

There was a tsunami ( or so the story goes) that hit Santorini around 1500 BC, destroying what is believed to be... Atlantis. (I want to also point out, from Gigora, that there is a set of islands near there called "the christiana islets" south west of santorini, perhaps a reference to the Christiane I)

Conclusion:
I think this explains a lot of what we are seeing. Even to the Indonisia map in chapt 5. Tsunamis destroyed both Indo, and Santorini. I would also predict that there is a picture of either Crete or Santorini somewhere in chapts 1-4. That's all I have for now, but I reserve the right to add later to it ?

Also, Big, Big, thanks to Gigora, mas13, Orchid, bunny15, JinSun, NeeperKat and everyone else that helped get this done. As usual, any
comments or gripes feel free to blast away.

Update: 5th February Thanks to Everyone involved in last nights great podcast reliving all the events of Find 815.

Listen to the full podcast HERE.

Thanks to the JoshMeister, Big-O from Cranky Fanatic, Curt Yanko from the Black Rock Podcast, and Amanda from The Lost Flashbacks get together and a big thanks to Congested to for helping to organise this event. 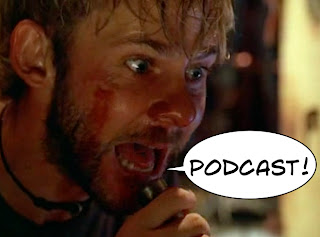 Hi Everybody! We are now in the final stretch for both Find815 to conclude and Lost Season 4 to commence. There is probably no better time to discuss Find815 in podcast form than now.

Join us Live on Talkshoe Monday, February 4th at 10:00PM EST/7:00PM PST for a special DarkUFO/find815.blogspot.com podcast where a wonderful group of Lost podcasters will sit down together and discuss everything we are still trying to make sense of. The best part about doing the show live is that any of you are welcome to call in and chat with the hosts of the show. Talkshoe even has a chat room function that lets you interact with the show through text if you are unable to call in. We will also post the show on the blog for all of those who will not be able to make it (partly due to the fact that many of you will be asleep, I'm sure.)

As of now the podcasters that will be hosting the show are:

To join the show simply go here the night of the podcast. There will be an option to listen to the show live. We will start gathering prior to the start time and you will have a chance to follow the instructions on how to call in. Hope to see you there next Monday.
Posted by Congested on February 04, 2008 16 comments:

Oceanic Airlines is giving away the goods

Update: 5th Feb Thanks to Josh who has found a way for non XBOX owners to enter.

You can enter by mail by hand printing your first and last name, address, city, state / province, ZIP/postal code, phone number and e-mail address (if any) on a 3x5 piece of paper and mail it to:

Limit one (1) entry per outer mailing envelope. Mail-in entry(ies) must be received by February 17, 2008.


“NO PURCHASE NECESSARY. Open only to legal residents of the 50 United States (includes the District of Columbia) 18+. Game ends February 10, 2008. For details including free, alternate method of entry, see the Official Rules.”

If for any reason an advertised prize is unavailable, we reserve the right to substitute a prize of equal or greater value as permitted. We will only award one (1) prize per person. All prizes will be awarded provided a sufficient number of eligible entries are received.

Thanks to everyone who emailed this to me.

Xbox Live subscribers in the United States have a chance at winning an Xbox 360 bag-o-goodies with Oceanic Airlines' Taking You Places You Never Imagined sweepstakes.

If you haven't noticed already, Oceanic Airlines has partnered with Xbox Live to give away Xbox 360 consoles, Microsoft points, Live subscriptions and special surprise packages to nine lucky peeps who download their theme. No Play & Win, no registration via Xbox.com, you have to download the theme to enter and that's it. Entry into the sweepstakes ends on February 10th, so make your way to the XBLM, locate the Oceanic Airlines theme and give it a download for a chance to win. Because even though they are out of business, Oceanic Airlines wants you to love 'em.

Code in the Talbot Interview

Update: 02/02/08 From comments posted by a number of members
It seems like this is nothing more than a a digitial watermark


I was on chat and noticed that Gigora
found that the audio file (mp3) that comes from the UCLA radio website
has properties that contain hexadecimal numbers in the Comments
section. This is highly unusual, so it was of great interest to me
when I found my copy of the mp3 and cried purging tears of joy! 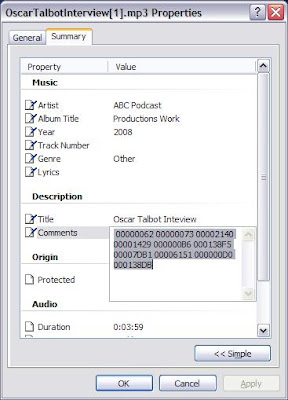 The conversion of these hex numbers to binary are as follows:

The binary, when converted to ascii translates to this:

This doesn't make a whole lot of sense for now, but I think we are
taking steps in the right direction to figuring if this means
anything... perhaps a lead into TMG's website?
Source:taiphun
Posted by SpOOky (Mark) on February 02, 2008 30 comments: 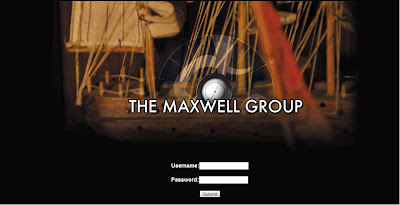 Just thought I'd post a couple of interesting screencaps of the oceanic comercial on Eli Stone.

I particularly enjoy seeing pictures of the plane wreckage. 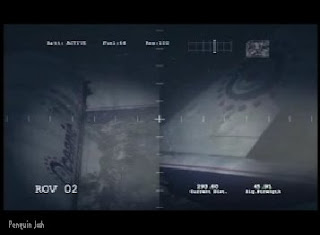 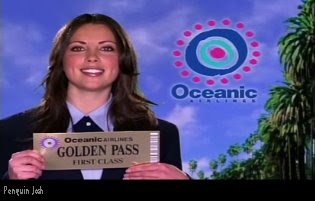 It seems the Maxwell group site not only has a new link to an audio stream, but the server is now "updated and secured". If you type in any random username and password you'll get this window: 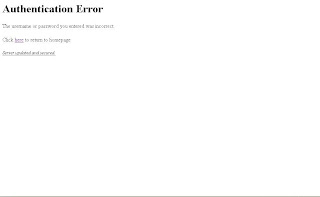 Now all we need is a username and a password. Ideas anyone?
Posted by JJB on February 01, 2008 27 comments:

I just popped along to Find815 and was greated by this new front page. 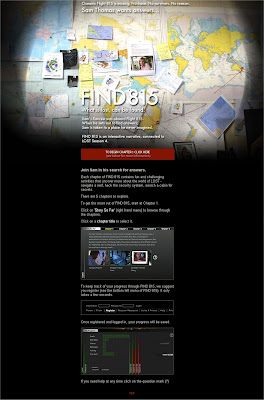 Email ThisBlogThis!Share to TwitterShare to FacebookShare to Pinterest
Labels: Find 815

Well here is what the final My Progress for Find815 should look like.

Thanks to Sebastian for the screencap.

Email ThisBlogThis!Share to TwitterShare to FacebookShare to Pinterest
Labels: Chapter 5, Find 815, My Progress

Update: 06:00 GMT Here is the audio for those having trouble.


I just noticed very briefly that the MG site had been updated. It seems that they have now put it back to what it was but I manage to grab the link. 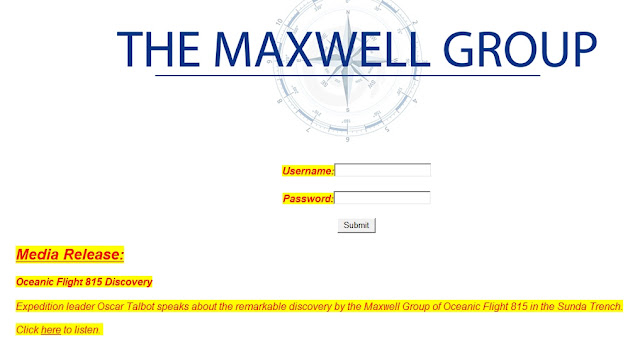 Thanks to SpOOky for the screencap for those having problems. 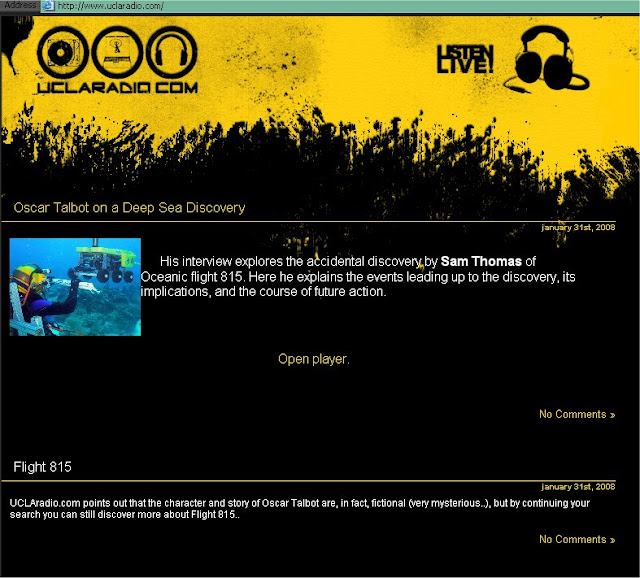 Email ThisBlogThis!Share to TwitterShare to FacebookShare to Pinterest
Labels: Maxwell

Thanks to DocArzt for getting the HQ version of the video.

Email ThisBlogThis!Share to TwitterShare to FacebookShare to Pinterest
Labels: Oceanic

Here are a few screencaps from today's activity of "Find Black Rock". This seems to be the end of LOST's Find815 ARG, but as we get more updates we will keep you all updated.

You can watch the videos and view a screencap of one of the several possible solutions at the following link: